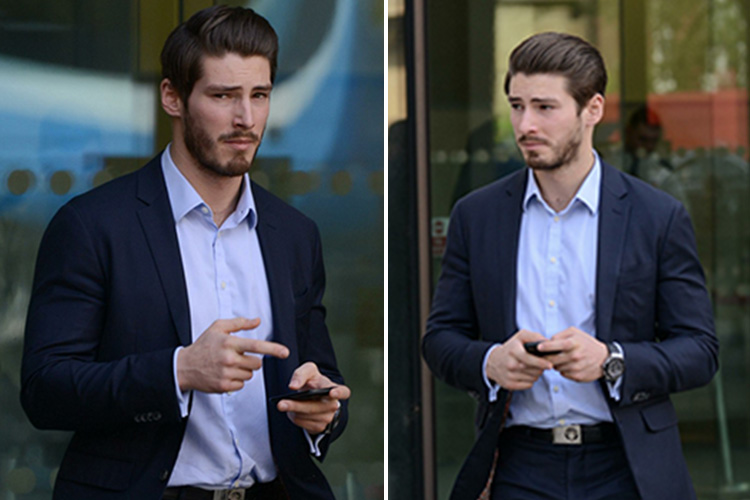 An investment banker who punched a Mayfair club doorman in the eye and called him ‘c *** gay’ after refusing to pay his Â£ 500 bill lost his job at Barclays and had to return to live with his mother and father, a court heard.

Bayer-Goldman refused to pay Â£ 500 on a Â£ 1,500 bill and, after assaulting Mr Tredoux, was then dragged to the top floor by bouncers and detained until police arrived, the magistrates of Westminster.

The exclusive private members club, which describes itself as “the quintessential chic and contemporary destination”, counts Prince Harry, Kate Moss and Jude Law among its clients.

Mr Tredoux, a part-time bouncer who was also a security contractor protecting ships from pirates in Somalia, has not been able to return to work since the incident.

Bayer-Goldman is the former director of public relations firm Glam London and was an associate at Barclays before losing his job for failing to disclose his arrest.

His Linkedin profile indicates that he previously worked as an analyst for banking giants JPMorgan Chase and Goldman Sachs.

He admitted one count of assault by beating at an earlier hearing in Willesden Green Magistrates’ Court, where justices of the peace found he had also launched homophobic abuse during the incident.

Today he appeared in Westminster Magistrates’ Court where he was sentenced to prison.

â€œMr Bayer-Goldman was there on December 12th and he refused to pay an invoice in the amount of around Â£ 500.

â€œWhat happened at the end was Mr. Bayer-Goldman pointed his finger at Mr. Tredoux and said ‘you’re a gay c ***’ and punched him in the face. “

He said: â€œI was called from upstairs to go help a waitress, Jessica, because she was having a problem with a gentleman who refused to pay his bill.

“We politely asked the gentleman, ‘Sir, would you mind paying your bill? “

â€œHe was very, very confident and he said, ‘I don’t have to pay my bill’ and I said, ‘Sir, unfortunately you have to do it. “

Bayer-Goldman then started walking towards the exit and Mr. Tredoux followed him.

He said: â€œI was following him from the left side and another member of the security came from the right side.

“He stopped at the foot of the stairs and faced me and at that moment he looked me straight in the eye and said, ‘You are a *** gay’.

â€œI felt ashamed and embarrassed. I would say that is unacceptable.

“As I looked to the side, the gentleman was about a yard away from me.

â€œLooking back I saw the punch hit my right eye and after that it turned black.

“When I came back, some of the security was helping me on both sides.”

Mr Tredoux added: “I had blurred vision for a few days, the same night I went to the hospital.

â€œI have follow-up appointments for my eye and I am due to see a doctor in February of next year.

“They said it’s a build-up of pressure that can be caused by an injury or a punch or something like that.”

Mr Tredoux also said he lost his ability to work as a marine safety contractor due to injuries sustained in the Bayer-Goldman attack.

He said: â€œI am very disappointed. I worked in maritime security off the Somali coast.
â€œI was just working part-time in December before I was deployed again.

“Medical care for the shipping industry is painful. Any problem with your eyes or heart disease means I can’t work. It’s my future. I’m no longer on the sea.”

He said: â€œHe was out with his seven best friends because one of them had just qualified in his particular field.

â€œThe dispute was over money, if you have a table in one place, there is a minimum amount that they expect you to pay.

Bayer-Goldman has two previous convictions, one for drunk driving and one for common assault in 2014, the court said.

Judge Nina Tempia gave Bayer-Goldman a one-year community order, requiring him to perform 100 hours of unpaid work, and banned him from drinking for 80 days with a 10 p.m. and 6 a.m. curfew in the morning.

She said: “He can say he has remorse, but he has no remorse for the victim, he has them for himself.”