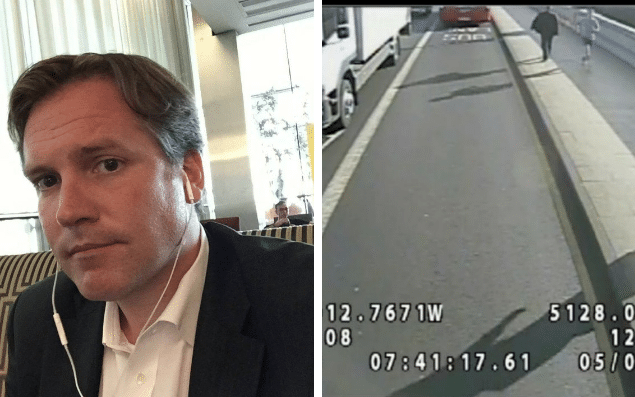 Eric Bellquist, an American investment banker implicated as the London Bridge Pusher, denies any involvement, insisting he was in the United States at the time. But was he?

Eric Bellquist a 50-year-old multimillionaire American investment banker denied being the individual implied pushing a 33-year-old woman into the path of a bus.

The complaint comes despite the man having been unmasked by UK authorities about an incident in May that saw the pedestrian pushed London’s Putney Bridge in the path of an oncoming double-decker bus.

Fortunately, the bus driver was able to swerve at the last minute, narrowly avoiding running over the woman, as Bellquist, who allegedly assaulted the woman, continued to run along the path.

Placed in police custody on Thursday, Bellquist’s lawyers claim to have “irrefutable proof” that the banker was in the United States at the time of the incident. This despite claims by authorities that the video links the runner as Bellquist.

Read a statement issued on behalf of the banker, partner of a London-based investment firm Hutton collins: ‘Our client was wrongly involved in this matter; he categorically denies being the individual concerned and has irrefutable proof that he was in the United States at the time of the facts â€.

“Therefore, we await a swift resolution of this utterly false allegation.”

According to a report via the daily mail, the banker has represented the investment bank in various transactions, in the leisure, media / telecoms and manufacturing sectors.

Bellquist currently represents Hutton Collins on the board of directors of Byron Hamburgers and was responsible for the company’s investment in CaffÃ¨ Nero.

Prior to Hutton Collins, the banker worked in the European Leveraged Finance group and Sponsor Coverage at Lehman Brothers. The Linkeln profile of the man identified him graduated from the University of Colorado at Boulder.

Meanwhile, the driver of the London bus that swerved to avoid the woman who was pushed around insisted it was ‘just doing your job’.

Footage of the May 5 incident, which took place around 7.40 a.m. that morning, was released by Scotland Yard earlier this week, showing a man running across Putney Bridge and apparently running over a woman on the way to ‘an oncoming double-decker bus.

The incident resulted in the woman sustaining minor injuries, which could have been instant death without the quick reflexes of the bus driver.

A senior source from the bus company “Go London” said it was only due to the low speed of the vehicle that the accident did not cause serious injury.

Told the bus operator via 5 News: â€œThe driver said he was happy to have been a hero, he was just doing his job.

“He is happy that he was able to react the way he did and that there was no serious injury to the lady.”

The driver, whose identity has not been publicly disclosed, has reportedly been driving buses for ten years.

Officers claimed the jogger crossed the bridge in the other direction about 15 minutes later and the victim attempted to speak to him, but ‘he did not recognize her’.

Speaking earlier this week, Sergeant Mat Knowles said: â€œAfter pushing her, he ran across the bridge and came back 15 minutes later.

â€œBy then, the audience members who had been helping the woman were gone and she tried to talk to him as he walked past her, but he just ignored her.

The closed call has once again reignited a heated debate among Londoners from ‘aggressive joggers’ who believe they have the right to drive, as well as what some may consider to be the ‘bigger than life’ the attitude of some of the city’s bankers as they “Masters of the universe”.

Nowadays, Eric Bellquist remains free as the authorities decide whether or not to lay charges.